Companies know they should be using their data more effectively, but there's just so much of it that it's hard to know where to start. The biggest hurdle, according to Patrick Lawler and Dave Derington of Azuqua is that data is isolated in different areas of the company. The second is that no one has a good process to analyze the data they gather, so it just sits there, accumulating. "The idea of 'my data' can be daunting," Patrick said. "You'll make incremental strides if you just break it down into little chunks."

That was just one of the suggestions the Azuqua duo made in their Gainsight Pulse talk titled Your Data Sucks, Welcome to the Club. Bill wanted to hear more about their thoughts on using data for Customer Success and how companies can use their data better in general, so he invited them to the Helping Sells Radio to talk about it. 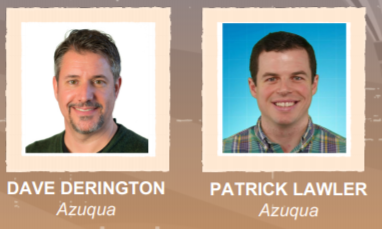 Getting started with data

Dave explained that it's critical for companies to understand the outcome they're looking to prove, and only then, should they look for the data to prove it. "You may or may not even have that data right now," Dave said.

Give your data a direction

At Azuqua, employees refer to data as "telemetry", which, as Dave explained, is "data with a direction." Aside from just sounding cool, telemetry is a good way to describe the way they use data, because they use it to guide them in the direction they want to go.

A real-world example of data with a direction

To illustrate this, Patrick and Dave talked about how Azuqua used telemetry to reduce their overall monthly churn.

Various teams worked together (customer success, support, and product teams) to find the data, measure it, and then to improve it. As they looked at their support ticket data, they were concerned that those with product issues were causing the customers to churn at higher rates.

When they finally dug in to those numbers, they saw that the product issues were not actual defects in the product, but rather a deficiency in the amount and quality of the documentation they had explaining the product. Customers were calling support because they didn't understand how to use the feature, not because it was broken. But until they dug in to the data and gave it a direction, they didn't know this.

Patrick was brought in to head up the company's user enablement efforts and decrease these kinds of support calls. Customer success teams spent more time on customer onboarding to help customers become more familiar with the product and its features, and monthly churn numbers due to these factors started to decrease.

"We started with wanting to decrease churn, and then dug in to the data we had, tied those together to come up with a way for that data to relate to churn," Patrick explained.

Use data to improve everyone at the company

Patrick and Dave are really proud of the work they did with this particular project because it really helped everyone at the company improve. From product development to customer success and support, everyone benefited from this exercise of giving direction to their support call data.

It's just a quick example of how one piece of data can be spun into something that can help everyone achieve their goals and outcomes.

To listen to the entire conversation Bill had with Dave and Patrick, check out the latest episode of Helping Sells here, on Apple Podcasts, Stitcher, SoundCloud, or wherever you listen to podcasts.

❮ Ep. 72 | Jessica McGlory believes in talking to people with her paid ads (and you should too)
Ep. 71 | Bill Cushard on how a Customer Education strategy can solve (almost) any business problem ❯